MMC Racing was founded during the Summer of 2003 by Matt Maple and Ryan McConkey. The team first raced in the SFO League, and then transferred to the then F1VWC. Also, around this time, Maple left the team to focus on his other team Mapes-VO. This left McConkey as the sole owner. The team competed in the 2003, 2004, & 2005 seasons. It withdrew from F1VWC/GPVWC officially on July 18th, 2005. It reentered the GPVWC to compete in the inaugural Masters Series in July of 2009. The team is still currently active in the Masters Series only. On May 28th, 2010 the team joined Race2Play and has been competing there regularly.

After the collapse of the original GPVWC, Ryan McConkey joined GPChampionship to compete. He became good friends with Matt Maple during this stint, as they were very closely matched and knew each other briefly from GPVWC. Leagues sprang up after most teams disappeared from GPVWC, and one such league was Simulated Formula One, SFO for short. It had a few familiar faces from GPVWC and also had a similar management structure aspect to it. Maple and McConkey were intrigued enough to create their own team and run as teammates. Since it was a joint effort from the beginning there was never really a debate about what the name should be. Maple & McConkey Racing.

Ryan was actually a manager at SFO already for Stealth Grand Prix's entry, but the urge to race and have his own team was enough for him to leave the position. It turned out to be a tricky maneuver, since you couldn't manage two teams, much less drive for one and manage another. It all eventually worked out however.

The team made it's very first racing debut in the British Grand Prix at Silverstone on July 19th 2003 in the SFO championship. It made a superb debut taking 4th & 5th positions. 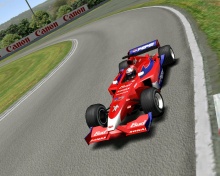 Even after a great start at SFO, the team was interested in moving elsewhere to race. Things were uncertain with SFO as far as stability and admin were concerned, so there was a certain fear that prompted Maple and McConkey to consider leaving the league. It just happened that GPVWC had returned as F1VWC and seemed to get stronger every day. It was too tempting not to join. Since Maple had his other team in the form of Mapes-VO, the two parted ways once they re-entered F1VWC. It was a somewhat bittersweet ending to a solid partnership, but McConkey was more than happy to continue running the MMC banner into the future by himself. There were thoughts of renaming the team however, 'Orbit Racing' amongst others were considered, but in the end Ryan felt the MMC name should continue and see how far it could go. In September 2003 the team was granted entry into the F1VWC.

The team was granted entry into the F1VWC in September 2003 by admin Andy Graydon. Since most teams had already completed deals for engines and sponsors, MMC was left with very limited choices. The team's first engine supplier in F1VWC was a sub-par Mugen-Honda powerplant. It was unfortunately around 55 bhp down compared to the top runners of the field. This didn't stop McConkey and his new teammate Paul Sleight, however. It was almost a boost for them to prove their worth with what they had.

The team's very first entrance into the F1VWC/GPVWC foray was at the United States Grand Prix around the Indianapolis Motorspeedway, which just so happened to make it a home race for the newly formed MMC Racing team. The team failed to score any points in the grand prix, but it was a good learning experience for the team.

The final grand prix of the season came at Suzuka and McConkey was able to secure 5th place on the grid. Sleight came in at 10th. McConkey was able to hold onto 7th in the end which gave the team it's very first points in only it's 2nd outing in the league. The future looked good.