William "Will" Wangensteen Ponissi (Milan, Italy 10/05/1983) is a team manager and current head of the GPVWC. He is arguably the most handsome man in the GPVWC. He is also a former driver, having competed in Supercup and Superleague.

Ponissi first joined the GPVWC in 2002 and took control of the league, then named F1VWC, by the end of 2003. By the start of 2008, Ponissi brought back the original moniker, GPVWC, ratified by the league's originator, Dan Lawrence when Dan gave his blessing for a revival of the GPVWC brand name.

William introduced his team, E.I.R.E - an acronym which is a play on words relating to his Irish roots - in May of 2002 at the Monaco Grand Prix, driving for the team himself. In 2008 the team was rebranded and became known as Nordsjoen Racing.

Aside from his current admin and managerial responsibilities, Ponissi drove for Constant Racing in the Superleague. His most successful season was in 2008 with Nordsjoen. The Italian scored seven podiums that year, including a well earned victory at Monza, where he edged past Jeroen Jansen on the last lap and won by less than a tenth of a second. He is currently the GPVWC's third most experienced driver with 83 races, second only to Kieran Ryan and Mark Wicks. 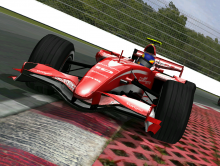 Ponissi driving for Constant in 2010.

Ponissi grew an interest in racing early on, and his first "simracing" was with NES's Nigel Mansell's World Championship Racing. Upon acquiring his first PC in 1996, he started playing F1GP and Grand Prix 2, and ultimately Grand Prix 3 and GP3 2000.

In 2002, improved internet access meant Ponissi became aware of offline Grand Prix 3 leagues, and joined the GrandPrixGamer league, where he drove in Blair Disley's Dizzo F3000 team. Unfortunately, the league folded two races in the season, so Ponissi moved to GPVWC just in time for the opening race of the 2002 season.

Ponissi driving for EIRE in 2002.
Arriving just a day before the 2002 Australian Grand Prix, Ponissi was scooped up in a last-minute deal by Dutch debutants Mommark to partner Australian Dan Regan. Ponissi missed qualifying as his contract had not been deposited on time with the GPVWC Administration and was disqualified from the race after his car's settings were found not to be within the rules. In his second race, however, in Malaysia, Ponissi finished 11th and claimed his first GPVWC point: just before the race, Mommark had been sold to Regan himself and had been rebranded SCUM.

Ponissi's Sepang performance wasn't enough to warrant him a drive at SCUM, and Regan replaced him with Peter Harding for the rest of the season. In an amicable transfer, Ponissi was sold to TGM, where poor team management meant he'd be the only driver for the best part of half a season. The GPVWC Administration grew concerned at TGM's lack of management and, before the Austrian Grand Prix, approached Ponissi for a takeover of the team. TGM competed for the last time in Austria, with Finn Risto Taipale alongside Ponissi, before being rebranded EIRE. Unfortunately, almost half a season of no development was to seriously compromise the chances of success of the car, which finished the Championship in last position despite Ponissi scoring points in Monaco, France and Japan.

Ponissi also competed one Grand Prix, in the USA with MCR before returning to EIRE for the final race of the season.

The 2003 season saw Ponissi switch to wheel. Driving for EIRE alongside Championship contender Daniel Wilkinson, Ponissi had a torrid start of the season, collecting two retirements and a disqualification in the first three events. The collapse of GPVWC meant Ponissi set out to rescue the league together with Andy Graydon - both having to curtail their driving duties in favour of league management.

Ponissi couldn't make an advantage of the reduced fields during the season, collecting one retirement and a 6th place (in the Spanish Grand Prix) in the two events before the influx of teams and drivers from SFO. One last race, for Stealth Grand Prix in the USA, saw Ponissi finish 16th.

The managerial aspect saw heartbreak for Ponissi's EIRE team: Wilkinson put in a fantastic effort in the second part of the season, helped by Kieran Ryan in the second car. Unfortunately, controversy during the United States Grand Prix, where Ryan was given a corner cutting penalty subsequently removed when it became obvious Shiro Ryong would have deserved one too, resulting in a loss of position, saw the EIRE duo go in the last race needing a win from Wilkinson and Ryan holding off Ryong for 5th. Sadly, a last lap overtake by eventual Champion Ryong saw the SCUM driver take the 5th place that left Wilkinson only 1 point short of the title.

The 2004 season saw the arrival of highly-regarded Scott Whiteman and Ross Loram at EIRE, resulting in Ponissi signing for debutants Woods Racing. Ponissi struggled in a very competitive field, and seven races with no points saw him replaced by Vincent Keersmaekers in the English team.

With the Belgian driver failing to show up on several occasions and Woods struggling for reliable drivers, Ponissi was recalled for two late-season races in France and Japan, but the best position the Italian could muster was 13th.

Woods Racing was demoted to F2VWC at the end of the season, so 2005 saw Ponissi take a break from simracing as a driver, concentrating on his EIRE team in a hiatus that would last for the whole of the 2006 and 2007 seasons. His only appearance in 2005 was with Woods as a last-minute replacement in the team's first race back in the Championship. Paired with Philip Cullen, Ponissi took part in the Italian Grand Prix finishing 19th. His seat was then taken by Giannis Pantas, before the Greek would be himself replaced by Mark Wicks for what would be one of the most enduring partnerships in the history of GPVWC.

The reformation of GPVWC saw Ponissi trying to muster up numbers for the newly rebadged Superleague. The Italian drove the whole season for Nordsjoen Racing, and the low numbers meant the possibility of scoring a good amount of points.

Solid points placements at the start of the season were followed by Ponissi's first ever podium at the Monaco Grand Prix, behind long-time friend Mal McKee. Ponissi went on to clinch two more second places in Great Britain and Germany, being narrowly beaten by eventual World Champion Laurentiu Albu. The highlight of the season, however, was the Italian Grand Prix, where Ponissi performed a great comeback to pass McKee and Albu on his way to a final lap showdown with race leader Jeroen Jansen. A spin by the Dutchman allowed Ponissi to close in to the Platform Michelangelo driver, and the power of the Nordsjoen car saw Ponissi slipstream and pass his rival on the finishing straight - winning by a mere hundredth of a second.

Podiums in Belgium, Austria and Japan helped Ponissi to a record second place in the Drivers' Championship and propelled Nordsjoen Racing to its first Constructors' Championship title.

The 2009 season saw the GPVWC embrace online racing. Ponissi was hired by Allen GP to partner Chris Allen in the Superleague. A promising start of the season saw the Italian retire when in the points in the Australian Grand Prix and finish a season-high 5th in China. However, a string of lacklustre performances resulted in no more points being scored until the mid-point in the season, the South African Grand Prix, with Allen dropping Ponissi for Chris Kinsman for the rest of the season.

Ponissi was surprisingly hired by Constant Racing for the Canadian Grand Prix, replacing highly-rated Mark Stanton: despite a brake failure when in the points in Canada, Ponissi went on to score in four of the remaining seven races and finished with a total of nine points, earning a contract renewal with Constant.

After missing the first two races of the 2010 season (through disconnection and unavailability), Ponissi endured a difficult first part of the season, scoring points in Abu Dhabi and Monaco. Better fortunes started in Bahrain with a 7th place, followed by strong placements in Canada and Mexico. A decent season finale saw Ponissi gather 25 points by the end of the season and place 12th in the Drivers' Championship - despite a high-speed crash involving teammate Mark Stanton in Singapore when a double-point finish was on the cards.

The 2011 season, on the other hand, was an extremely difficult and frustrating one for Ponissi. Unable to adapt to the 2011 specifications, the Italian was miles off Stanton's pace despite a very strong car. A line of poor showings in the first races saw him replaced by Luis Fernando Laaff midway through the season; return before the Canada saw some better performances in the second half of the campaign, but despite some strong races he could only muster one point in the season, at the Italian Grand Prix.

Despite Constant Racing's willingness to confirm Ponissi for 2012, the Italian driver stepped down from his race seat stating he'd like to take a break from the Superleague.

Ponissi's exploits in the GPVWC today are as part of its Administration; seemingly having hung up his helmet after the 2011 Superleague season to focus on his managerial duties. Since 2011, he has overseen the introduction of engine development to Superleague as well as numerous other major changes including, in 2016, a change in platform to rFactor 2.

† Driver did not finish the Grand Prix, but was classified as they completed over 75% of the race distance.

† Driver did not finish the Grand Prix, but was classified as they completed over 75% of the race distance.